When it comes to environmental pollution, visibility often spurs action. Greenhouse gases such as methane or carbon dioxide are colourless, and their natural and anthropogenic emissions go unnoticed. Our eyes cannot see plumes escaping from decomposing organic matter in wetlands, landfill facilities, or faulty oil and gas equipment. Sensors placed within these gas plumes provide measurements of gas concentration, but not direct visual representations and have less impact than images of a smoking incinerator stack or a trail of oil in the ocean. These images are powerful drivers of change, so let’s find out how invisible methane becomes visible.

A screenshot of a plume of methane gas using an infrared camera by Clean Air Task Force (Credit: REUTERS/CATF)

Why can’t we see methane?

Human vision evolved to see a particular range of light or wavelengths. Over this range, the sunlight that penetrates the Earth’s atmosphere is not blocked by gases such water vapour, oxygen or carbon dioxide. It is the “visible” range (between 400-700 nm). 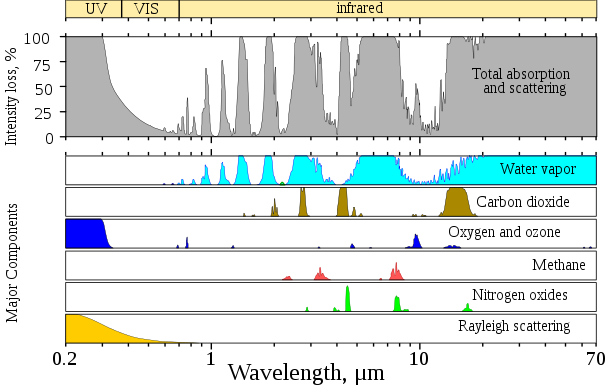 In the above figure, it is just right where the atmospheric absorption is minimum. If our eyes were operating in the ultraviolet at 0.2 micrometres (µm), or in the mid-infrared at 7µm, we would be in the dark as most of the light would be absorbed by water vapour and the other gases that constitute the atmosphere. Evolution does things right, doesn’t it? But people with a condition called aphakia possess ultraviolet vision!

Methane also absorbs light, but at ultraviolet and infrared wavelengths that we can’t see so it does not have a colour in the visible range. Note that not all gases are invisible. For example, the halogen family are coloured elements and as they get heavier the colour gets darker (chlorine is light green and iodine is bright purple).

How to discover a kind of light that our eyes cannot see?

Sir Frederick William Herschel (1738-1822), famous for his discovery of the planet Uranus, noticed that telescope filters of different colours seemed to pass different amounts of heat. He hypothesized that the colours themselves could be of varying

temperatures and designed a smart experiment to verify this (shown on the figure on the right).

He directed the sunlight through a prism to split it into a rainbow, then measured the temperature of each colour. Herschel discovered that the red rays of sunlight have a greater heating effect. As the Sun moved across the sky, the spectrum moved across the table. One thermometer was just beyond the red end of the spectrum and Herschel noticed that the temperature was even higher than before.

What Herschel had discovered was a form of light now known as infrared radiation. This discovery paved the way for our understanding of the full spectrum of radiation which also includes ultraviolet, gamma rays, x-rays, microwaves, and radio.

How do we get methane images?

Optical Gas Imaging (OGI) cameras are used to create images of methane emissions. They are sensitive to infrared wavelengths instead of visible light. To picture methane, cameras use spectral wavelength filtering to allows infrared wavelengths between 3.2 to 3.4µm to pass through to the sensor, which is one of the spectrum ranges over which methane is “visible” .

There are cooled and uncooled infrared cameras. Cooled cameras are much pricer than uncooled one. Cooling reduces thermal noise by bringing the detector temperature way below that of the observed scene. And unlike traditional photography lenses, which are glass, the OGI cameras are fitted with metal lenses made from germanium, which is transparent at infrared wavelengths. The images produced by the OGI camera can be seen as black and white images or be processed using pseudocolour to enhance contrast and features and ease the interpretation.

Several surveying conditions can limit the performance of OGI cameras at detecting emissions, like the presence of water vapour. Water vapour presents peak of absorption outside the chosen methane detection range, but it still have some absorption in that zone. That means steam can show up in images similarly to methane and only trained and experienced OGI users can make the distinction. Also, the scene behind an emission point can complicate methane imaging. It can have a temperature similar to the released methane, reducing the contrast between the two. Methane is more visible against clear blue sky than against clouds or vegetation.

At Fluxlab we use a FLIR GF320 infrared camera that visualizes methane and other volatile organic compounds. Below are pictures that were taken during oil and gas well pad mobile surveying. We measure methane concentration while driving around pads with our truck. When we see an elevation in concentration, we use the OGI camera to pinpoint the source of emissions. Then the truck is parked in a strategic location to perform stationary measurements within the detected plume to confirm the source and assess its emission rate.

On the left, the infrared picture is represented with a greyscale palette and it has been matched with a visible image of the same scene. Both IR and visible images are not exactly the same angle, but close. And on the right, the infrared image has been processed using the FLIR high sensitivity mode. This mode enhances the difference between frames and makes emissions stand out more clearly. On both IR images, we can see methane escaping from a flare stack.

By making otherwise invisible greenhouse gases and other pollutants visible, images and video from OGI cameras can change the perception of air pollution issues and prompt policymakers, industry and the general public to take swift actions to address them. 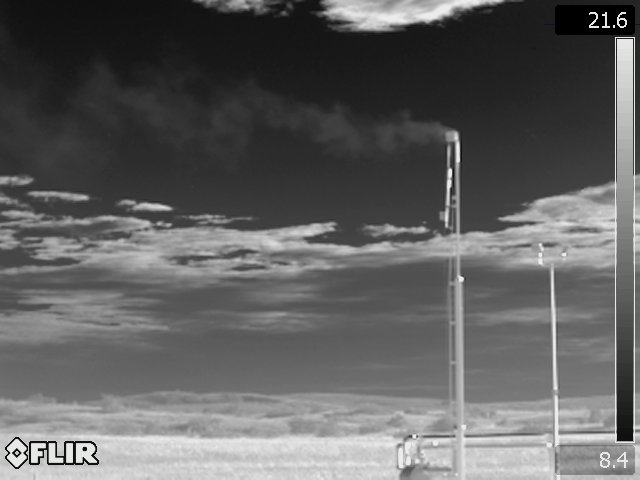 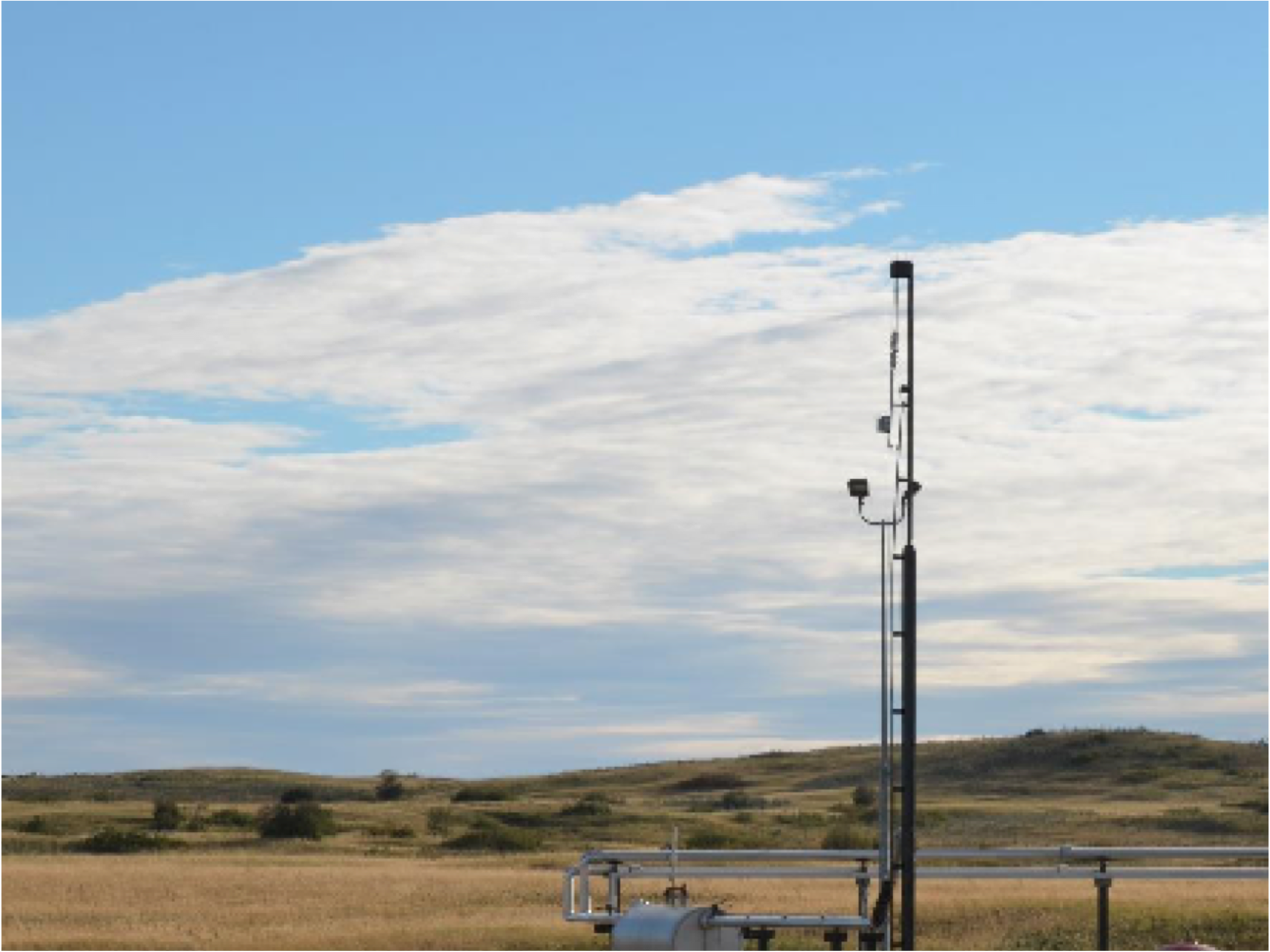 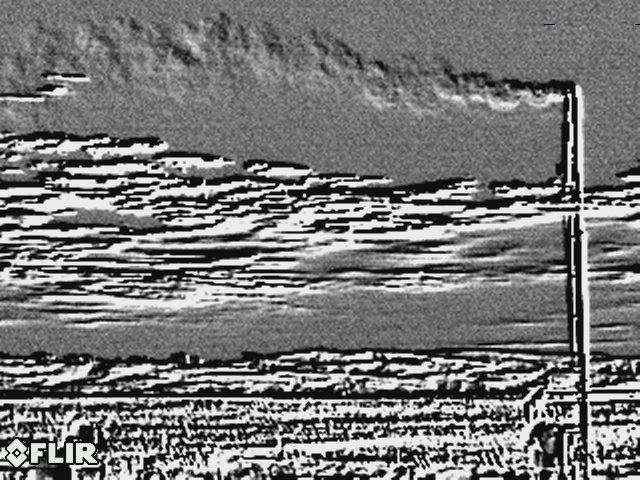 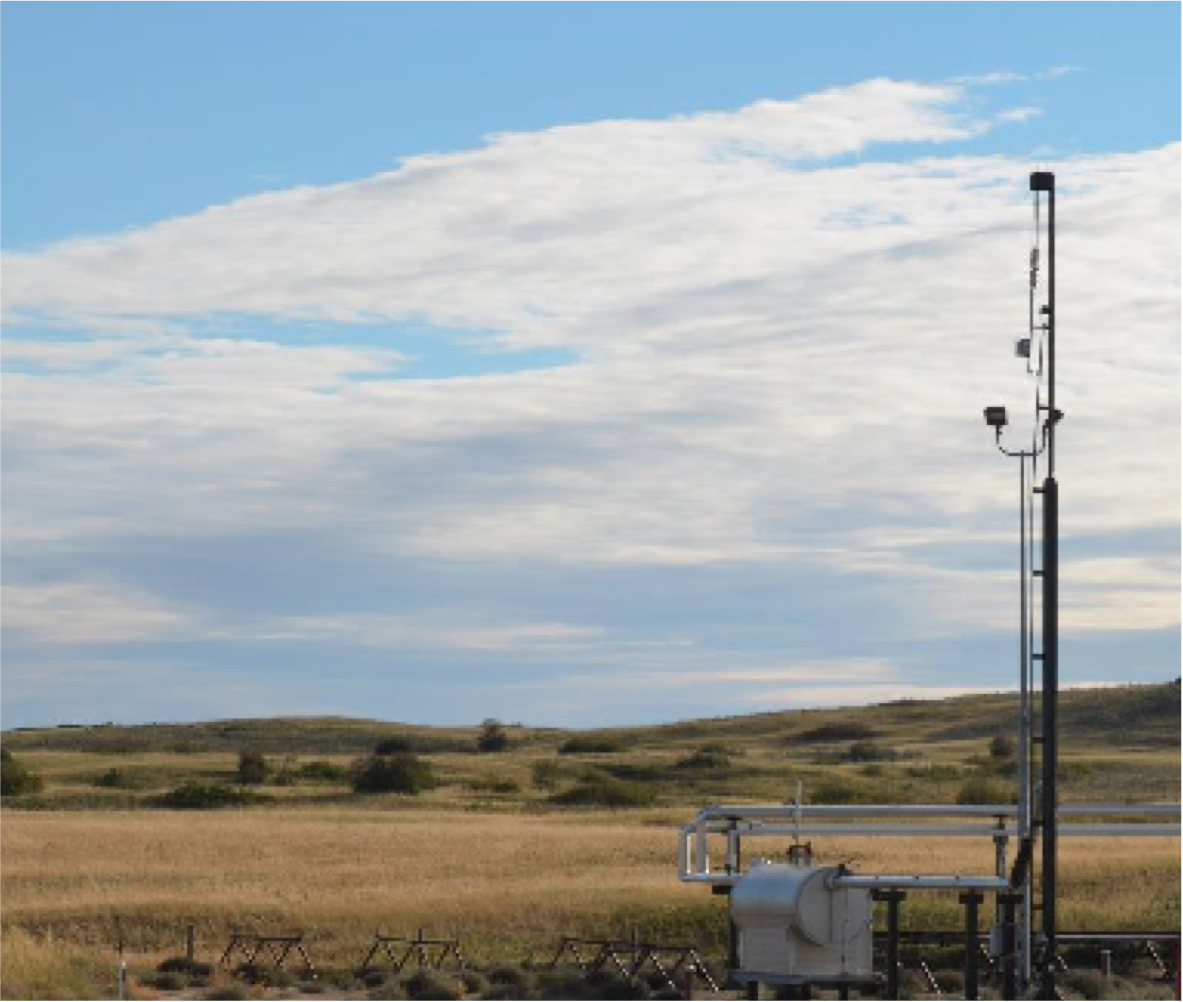