Over the past several years, the Flux Lab has been developing a technique called mobile surveying, which detects natural gas leaks from oil and gas infrastructure using data collected while driving on-road. Natural gas is composed primarily of methane, the second largest contributor to the greenhouse effect. Methane stays in the atmosphere for a much longer time than carbon dioxide, which leads to it having a greater warming potential. Because of its high warming potential, it is very important to detect and repair methane leaks as quickly as possible. 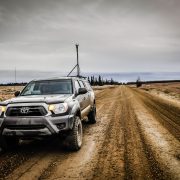 We use a pickup truck equipped with instruments that collect data every second while driving, such as gas concentrations, wind speed and direction, GPS locations, and more. We analyze the data to detect methane leaks, approximate where the leaks originate from, and estimate emission rates. Recently drafted federal methane regulations require oil and gas operators to directly measure, rather than estimate, their atmospheric methane emissions. So, in addition to the environmental motivation for developing this type of technology, industry is presently in search of low-cost methods for detecting methane emissions from oil and gas infrastructure. Mobile surveying has potential to be an effective and economic way for operators to comply with these regulations.

Previously the whole mobile surveying process took weeks from the time the data were collected in the field, to the time we had final results about where leaks were coming from. While driving, the only feedback we would get was a real-time plot of the methane concentration. The datasets weren’t processed or analyzed until all the surveying was completed, which means it wasn’t possible to adjust the survey route while driving based on results.

We realized this was a major pain point in our workflow, so we decided to develop real-time analysis software. With every second that passes, the software processes a new datapoint which contains the location the data were recorded at, the compass bearing of the truck, methane concentrations, wind speed, and wind direction. The software initially uses these datapoints to calculate the background methane levels, so that it can detect when we encounter a methane plume. When a plume is detected, the software runs the data through our “plume attribution algorithm”, which looks at all surrounding oil and gas infrastructure and decides which is the most likely source of the leak based on wind direction and distance. The software uses all of this information to model the plume and estimate the rate at which methane is being emitted from the infrastructure. 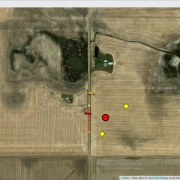 The results of the real-time software are displayed on an interactive web map that the technicians have in the truck, which significantly increases the quality of data that they collect. Technicians can now adjust routes as they drive, in order to increase our level of confidence that we have identified the correct emission source. We can drive past the suspected emitters, multiple times down-wind, in order to rule out other infrastructure and significantly increase the likelihood that we attribute the leak to the correct source.